“The best of us must sometimes eat our words.”
― J.K. Rowling

It all started after a morning of errands with my husband. We had dropped of books and movies at the library, took a new route to Tractor Supply, and then headed to Woodman’s for groceries.

Later that night, as I was lying in bed, I had an unsettling thought. I had intended to get cash back at all of the stores we shopped at. My husband had an upcoming trip to Germany, and I was being Ms. Frugal,  avoiding cash machine fees.  Where had I gotten cash back? I popped out of bed, looked in my wallet, and found $40.00. Huh. I thought I had gotten cash at two places. I should have $80.00.

I looked at my receipts, and saw the $40.00 cash-back entry on the Tractor Supply receipt. My immediate conclusion was that Tractor Supply had not given me my money.  It made complete sense to me in my sleep deprived (and hormonally sopped) state. And to answer your question now… NO,  I did not look for the second receipt that I most definitely should have been looking for.  I was a lady on a mission.

Early the next morning, I was on my 40 minute quest to Tractor Supply, armed with my receipt and my conviction.  I walked into the store to find the young woman who had checked me out the previous day. As I asked to see the manager, I eyed her and chewed over if she had pocketed my money; maybe X-Men and no expense spared at the concessions?

The manager smiled as she walked up to the register. “How can I help you?”.  I slowly pulled the receipt out of my purse and pointed at the evidence.  She mumbled untruths about last nights reconciled accounts, and there was talk of “going to the back room” to check the books again. I was not backing down. No gift certificates or in store credit either. I wanted cash.

She continued to be disagreeable as she walked towards the registers. She opened the till, counted the money, and handed me the $40.00.  My mission was accomplished.

That night, around the same time I had the original cash-back thought, I had a much, much more terrifying thought that I proclaimed to all who laid near me: Dear God, there was no second cash-back! We had gone through the self-serve line at Woodman’s and were unable to receive cash. Somehow (please don’t judge me) I had completely blanked that out.  My daughters both stared at me with empty expressions, until a smile crept across my older daughters face. Her timing was magnificent…”You robbed Tractor Supply. Oh my God. You really robbed Tractor Supply. You just walked in, demanded money, and they gave it to you!!!”.

And that my friends, is how I came to be known as the Cash-Back Bandit; armed only with my false creed and a crumpled receipt.

Epilogue: The following day, I left early to return to the scene of the crime, with an apology note, $40.00 in hand and some humble pie on my breath. I did not end up doing any hard time, yet I am living with the whispers.

What have I learned?

1) We are not always right! Can you believe it?

2) Think the best of people.

3) Take time to laugh at our mistakes.

4) Forgive and be forgiven.

5) Take the time to really listen to others. They might have something important to say.

6) Take time to process your thoughts. The need to act quickly may be a red flag.

7) Tell your stories, so others can learn from your successes and mistakes.

“Most people die of a sort of creeping common sense, and discover when it is too late that the only things one never regrets are one’s mistakes.”
Oscar Wilde 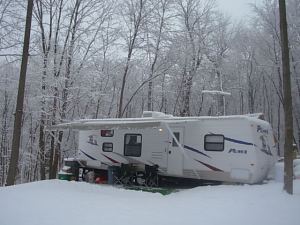 In 2007, my husband and I sold our house near Minneapolis, Minnesota, purchased 11 acres of land right outside of River Falls, Wisconsin, and had a 27 foot Palomino Puma travel trailer dropped into the woods that we decided to call home.

One of the first things that confounded me about travel trailer living was how we were going to dispose of the “black water”, which is travel trailer lingo for human sewage. We had organized and read about so many things but had not gotten to that incidental. We did have a little time to investigate the best practices of sewage removal, being that the travel trailer tank could take a couple of weeks to “fill”.

After a couple of internet searches, we decided to purchase a black water tote, which quickly became known as the poopy tank (within the confines of our home). Here is a picture of what it looked like:

We purchased the travel tote at a camping store near Rogers, Minnesota. The wheels were supposed to make getting from here to there easier. I was not quite sure where “there” was yet, but we would find out soon enough. It held approximately 18 gallons of liquid and was on sale for around $125 US dollars.

We came across a dumping station that was conveniently located about 10 minutes from our property, where one could dump black and grey water for the bargain price of $2.50. Now that I was clear on the destination of our tote’s future contents, we were ready to take the plunge and say, “Let it be filled”.

The following are directions by Mark Robinson, ehow.com. on how to empty the travel trailer’s black water tank: (Please skip the bold print unless you are hoping to take a nap sooner than later).

3. Feed the RV sewer hose to the dump hole.

4. Attach the drain fitting onto the other end of the hose and place it into the dump hole. Locate the drain release lever near the black water tank drain port and open it. The tank will proceed to dump its contents. Close the drain after you stop hearing the black water draining from the tank.

5. Detach the RV sewer hose from the drain port. Use a garden hose to flush out any remaining black water residue from inside the hose. When finished, disconnect the drain fitting and remove the hose from the dump hole.

I am not sure if having those directions could have changed the unfortunate course of events that were about to unfold, but the first couple of fills and dumps were very challenging. The substandard hoses and connections that were included with the tote were not giving us the secure seal you would look for in something that transports “this” type of liquid. We had leakage issues in the car on the way to the dump station and some embarrassing spillage while dumping.

Now we progress to a cold day in mid-November. I do not know the exact date, but time was being noted by how many days we had left to return the poopy tank. It had a 60-day return policy, and we all agreed that the tote needed to go back. We had grown tired of its cheap parts and seeping crevices, but we needed its services one last time.

My husband was once again trying to attach the annoying sewer hose to the drain port while the girls and I watched from the back travel trailer window. The process was proceeding in the usual way; my husband’s tremendous frustration and curse words silenced with the closed windows, while he wielded clamps, hoses, and the tote simultaneously.  And then it happened.. the small cracks and weak seals in the sewer hose finally gave way with an appalling force, spraying everything in its path. The trees,  the windows, the nearby shed, the chicken coop, and my husband were all showered with sewage.  Oh, so very uncivilized.

“A sense of calm came over me.  More and more often I found myself thinking, “This is where I belong.  This is what I came into this world to do.”
―    Jane Goodall

This story begins on a cold morning in December, but not too cold, and shortly after what I consider to be early. I am standing before the sliding glass door, peering out at some of the telltale signs of winter. I am ready to brave the elements. As I walk to the barn, one thought is flooding my mind… ROOSTER; our little Katniss, the bantam cockerel with the ever-growing ego. He is not unlike the “surprise” baby that results from a moment of spontaneous passion. This rooster resulted from a moment of spontaneous shopping at Tractor Supply, without thought of the repercussions of the unsexed chicken. We lucked out and only ended up with 2 roosters out of the 10 chicks purchased, one being a peaceful and somewhat androgynous little guy.

On this particular day, I made my way into the barn without any trouble. I began my chores with the sprinkling of the scratch grain for the chickens. The grain hides in a grey plastic bin that I need to bend over to open, leaving me particularly vulnerable to rooster attacks. I have to admit, each time I lift my head triumphantly with the full container of grain, the bin’s lid securely shut, and the possible attack averted, I am lulled into a false sense of rooster confidence. This is when I begin telling myself the story that our unspoken agreement of civility and friendship, due to my watering, sheltering, and feeding him, has finally settled in and attacks are something of the past. Denial is a powerful thing.

As I began my usual struggle with the God-forsaken lock on the goat gate, the foot-tall monster overpowered me. Katniss fully seized this moment of distracted frustration with a stealthy jump onto a haystack, giving him the running start for nothing other than my head. I have to admit, I have had a head attack before, but nothing like this one. It was as if I had a saddle on my head and he was riding the mechanical bull. He hung on tightly as I shook vigorously and screamed profanities. I was wearing a knitted hat, which gave him a sturdy place to dig into.  The climax came when I noticed the goats staring at me with a look of terror. Looking into their eyes, I knew this had to end. I gave him a very powerful wallop as I swung my head towards the ground and off he flew.

You know how “they” say never discipline your children when you are angry. Well, “they” are right. I had my newly sharpened pitchfork in my hand before he had time to mutter cockle-doodly-sorry. I imagined myself doing the 1, 2, 3-pull slaughter technique, with his head on the ground, under my foot and his feet tightly gripped in my furious hands. Deep breath…

Amazingly, Katniss is still living happily in our barn today and probably will for the rest of his days. You know… he could change. 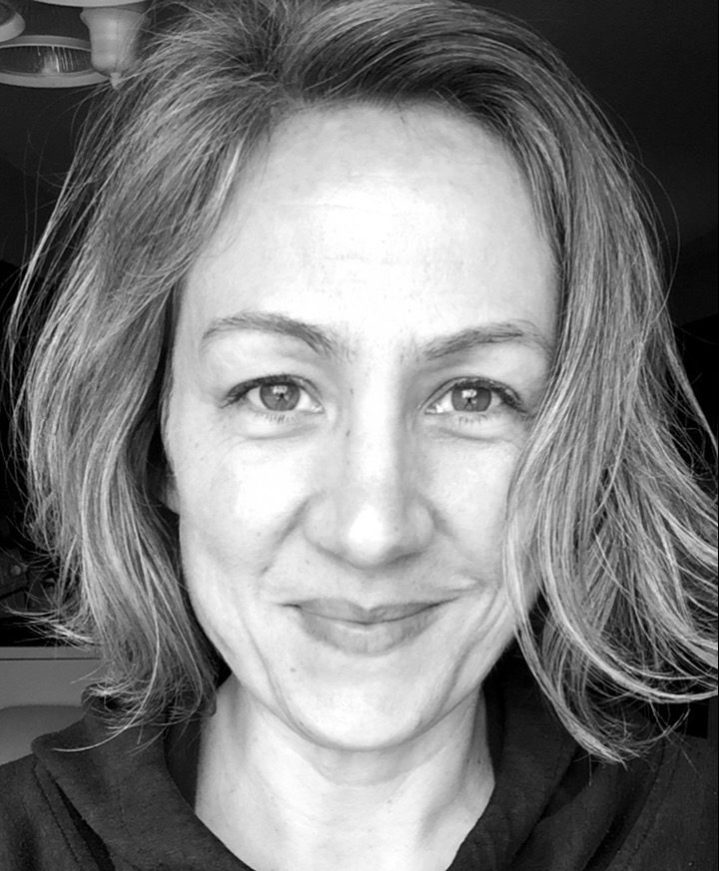